I hope you’ve had an exciting week last week, I did and I am feeling like I had a musical overload. It started on Thursday when I was lucky enough to go and see Usher. I ‘m sure a lot of you managed to get tickets and I must say he has only gotten better with age, just like a fine wine one of my other favourite things.

When I was in my early teens my sister and brother took me to my first ever concert which was Usher. The 8701 concert, I remember it vividly, wishing I was the girl he got on stage and gave a rose to whilst he sang. I may be showing my age here but that was my bench mark for all future concerts, so as you can imagine my anticipation for Usher was very high. Did he surpass my original experience? ‘Yeah Yeah’. I know that’s cheesy but it’s true. He took us for a tour of his musical life and like the performer he is, we had singing, dancing and some great visuals in the background, with that much going on as well he was obviously quite sweaty but my friend still said she would ‘lick the sweat off of him’. I don’t think any of the females minded as there were screams of I love you Usher everywhere and I don’t blame them his voice alone had me sitting quietly mesmerised, it reminded me of the TGT concert when Tank sang ‘I Can’t make you love me’, sometimes all you want to do is just listen. Unless you’ve got your friend singing badly in your ear as well, a cherished experience but that was just the beginning. 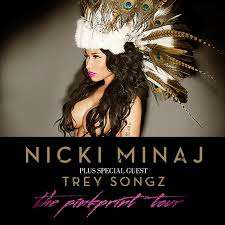 Concert 2 last week happened to be Nicki Minaj supported by Trey Songz. I have always been a massive Nicki Minaj fan and my friend Emeke used to say I should be an honorary member of Young Money with the way I have learnt all of her songs. For all the ladies out there she was supported by Trey Songz and he seemed amazing but I won’t lie, I only caught his last 2 songs. It was time to push through the crowd after that as I had booked standing tickets on purpose. Nicki was another person I had seen before, she was one of the acts at my first Wireless festival years ago and we all know she’s there this year too (maybe I have tickets). It’s safe to say I have a girl crush and to be honest as much as she is beautiful it is solely her music that has always resonated well with me. She started off with her latest album which she said is her most personal to date. The atmosphere from the crowd was amazing and the dancing that was going on around me made everyone move. She definitely knows how to get a crowd going and the positive message she ended with was what I think a lot of young people need to hear. Go to school, work hard and basically never give up. When I am on these last little hurdles for my book I must admit there are days when I want to cry because I am so tired and I want to just sleep for weeks. The point I am making is these people give you the formula if you believe you can do something and you keep working at it, it will happen. It may not be overnight, but chase your dreams. 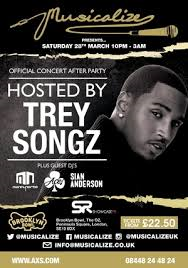 They say dreams do come true and I may have had a massive crush on Trey Songz previously and I used to say I was marrying him. However, as much as I do think we can get our dream guys, I have realised there is a difference between loving someone’s music and loving them. Now I may have missed Trey opening for Nicki but thankfully I have some amazing friends, which I’m sure you all do, and mine went out of their way to make it possible for me to go to his after party. Guess What? He even performed! Only about 4 songs but that took my Trey count up to 6 songs for the evening. I was pleasantly surprised when he sang a new song called ‘Slow Motion’ and he told us all, he is dropping another album, ‘Trigga Reloaded’, on the 14th of April. I have had a search online and I can’t find it yet but that date is now diarised in my iPhone. I will definitely keep you posted on that one!

Enjoy the rest of your week guys…